The Finnish Defence Forces International Centre’s Integrated Crisis Management Course (ICM) is organised together with Crisis Management Centre Finland (CMC Finland). The course aims to increase awareness and understanding of comprehensive crisis management approaches and to improve cooperation between different actors. During September, we will publish three writings about the course. 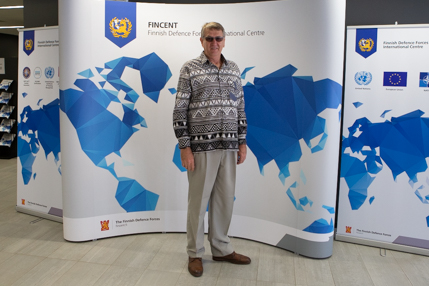 South African Waldemar Vrey served for 25 years in the armed forces, after which he has worked in international UN operations in Sudan, South Sudan, Somalia and Liberia in the field of disarmament and security.

His teaching on the ICM course focuses particularly on the themes related to the principle of legality, or rule of law. According to the principle, no one can be sentenced to a punishment based on an act that is not punishable by law at the time it is committed.

Vrey says, that they started international deployments during his time in the South African armed forces. Operations that he worked with developed into international, African Union operations. After gathering experience int he armed forces, Vrey worked for the United Nations for 14 years. There, his tasks have mainly dealt with the security sector and disarmament issues. One of the most memorable international operations for Vrey was the recently ended UN Mission in Liberia (UNMIL), where he was the Deputy Special Representative with the responsibility over political and rule of law issues.

At the moment he is a crisis management consultant and teacher in the Finnish Defence Forces International Centre (FINCENT), and a teacher in the Austrian Armed Forces and in the United Nations Staff College.

Finnish knowledge and skills have already been utilised in peacekeeping training for a number of years. Vrey says that Finland is strongly committed to the UN’s peacekeeping goals, particularly by training personnel before they are deployed to international operations. In Finland you concentrate on the so called grassroots leadership and the way in which peacekeeping is organised, he states.

On the comprehensive crisis management course the goal is the give the students the readiness the challenges they will face in the field, and how to work together with people regardless of different backgrounds or different organisations. Vrey says, that it’s fruitful to go over the situations that you might encounter in the field when you get a chance to do it in a peaceful and safe environment.

− I don’t think you always need to be out in the field to practice and train.

The course also includes role playing, so potential real situations can be simulated in a pressure-free environment already before the deployment. Vrey mentions that sometime the role playing-scenarios feel very real.

− The instructors live their part so believably, that the exercises are able create very challenging and realistic situations.

Cooperation is the Key to Success in Crisis Management Operations

Vrey thinks that the most important thing in a crisis management operation is effective communication between organisations and actors. The course emphasises the point, that in an international and complex environment you have to constantly concentrate on successful communication. The students are encouraged to make sure that the message recipient understands the message in the way that they intended. Vrey specifies that paying attention to communication is more of a crisis management approach, rather than the actions that are done.

− In the end, what matters the most, is successful cooperation in crisis management operations.

There have traditionally been challenges between the different police, civilian and military actors in a crisis management environment. You are faced with situations where people are not used to working together with representatives of different organisations. Insecurity, and even fear, towards the other actor make crisis management more difficult. The ICM course tries to diminish prejudices and to strengthen cooperation and openness between actors, because the UN mandate, ie. the authority to monitor and develop an area cannot be realised without cooperation over organisational borders.

− The Integrated Crisis Management course in FINCENT is particularly about increasing cooperation and diminishing prejudices between the actors and stakeholders. The course students have been carefully selected to ensure that there are representatives from a wide variety of organisations, Vrey clarifies.

− When the students finally are in the field, it is time to apply the things learned into practice, and to meet the simulated scenarios in real environments. We hope that on the ICM Course we have managed to support the students and give them tools to manage challenging situations already in advance, Vrey sums up.

Fincent celebrates its 50th anniversary in 2019. The anniversary seminar takes place in October. Read more about the seminar and how to follow it online.