The Military Academy is located in Santahamina, Helsinki. It is responsible for the Bachelor of Military Sciences studies given in the National Defence University and also provides guidance on the studies organised in the Service and branch schools. 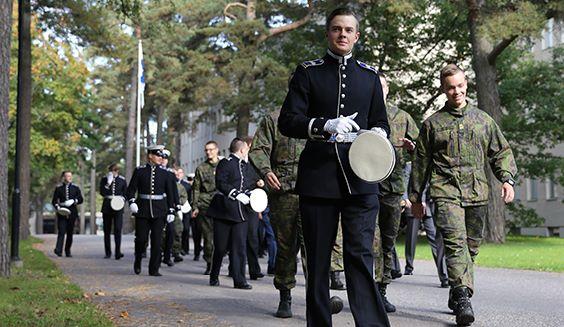 The Bachelor of Military Sciences degree is the first university degree and it comprises 180 ECTS. Along with the degree, the students complete a total of 30 ECTS credits of military vocational studies, which are a part of the 210 ECTS credits required for a commission as an officer. The degree and its studies are completed in three years. The students of the Military Academy are called cadets. A cadet graduating with a Bachelor of Military Sciences is guaranteed a job in the Defence Forces. Upon graduation s/he is promoted to the rank of Lieutenant and begins working in his/her assigned Service. Often the first duties are related to conscript training.

The anniversary of the Military Academy is celebrated on 20 March. The history and the traditions of the Military Academy reach back all the way to 1779, when the first military academy was established in Haapaniemi in Rantasalmi. On 20 March 1779 Colonel Yrjö Maunu Sprengtporten sent a written petition to Gustav III of Sweden to establish a permanent military academy.

The honourary march of the Military Academy is Ateenalaisten laulu (the Athenians' Song). The march was composed by Jean Sibelius and it was adopted on 18 February 1920.