The project, which is funded by the Academy of Finland, and called Hybrid Terrorizing. Developing a New Model for the Study of Global Media Events of Terrorist Violence (HYTE), looks at how terrorist violence is visible in the media, and how terror attacks, or terrorist media events gain publicity. The research group looks at terrorist media events in the current multi-faceted, i.e. hybrid, media environment. 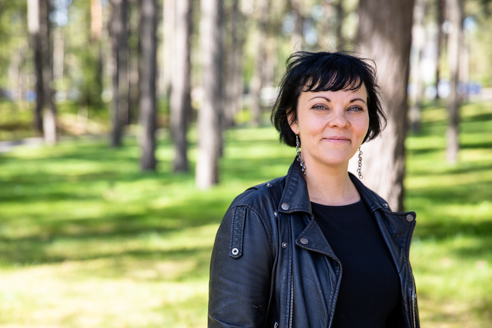 The four-year (2017-2021) research project includes the National Defence University,University of Tampere’s Tampere Research Centre for Journalism, Media and Communication, and the Media and Communication Studies discipline from the Faculty of Social Sciences of University of Helsinki. The project looks at mediatisation through versatile material and one of the goals of the project is to create methodology for looking at and understanding the terrorist attacks spreading in the hybrid media environment. The goal of the project is to increase knowledge about the mediatisation effects of violent media events and terrorist activities.

Post-doctoral researcher Noora Kotilainen, who works in the National Defence University’s research group for the HYTE project, explains that the media is a central tool for modern terrorists. The versatile modern media plays an important role in terrorism’s operating logic, more or less defining its visibility and thus, effectiveness. It is therefore important to look at and analyse the media logic of terror and terrorist violence.

− Today, terror does not actually exist without media, that is to say that the media is the primary source for terrorists to disseminate their message and they use it very effectively to their advantage. In a very simplified way, you could say that without media visibility a terrorist act would be of no use. Therefore, if we are able to understand the media logic of the terrorists, we may be able to diminish the media visibility of the terrorist acts and even violence, Kotilainen says.

Noora Kotilainen states, that today the goal is to get a wide selection of different actors and perspectives in society involved in academic projects. − The purpose of the research is to provide new information on the operating logic of the media, and to give the results to those who need them, Kotilainen explains.

− It is important to understand how terrorists communicate, and how they use the media also as a platform and a sounding board for terrorist propaganda. The research project provides the military with concrete information on how the power of the media should be understood and how to conceptualise violent media events. This is significant also from the security point of view, Kotilainen explains the National Defence University’s interests in the project.

The main focus of the research project came to be the terror attack in March 2019 in Christchurch, New Zealand. Kotilainen says that the research group "trained" in collecting data and monitoring an event by following the attack in Strasbourg France in December 2018. They also followed the news about it and the mediatisation of the attack.

She explains that the New Zealand attack was selected as the main focus because it brings forth the media logic of violent attacks in many ways. The HYTE researchers are looking at, for example the dissemination of the attacker’s live stream and what was done to try prevent that, how the traditional reported on the events, how the Prime Minister of New Zealand tried to prevent the name of the attacker from spreading, and how emotions were shown online. Kotilanen states that the attack in New Zealand shows the versatility and complexity of the hybrid media field.

The data in the research consists of over one million tweets, and the researchers are also looking at the traditional media and mainstream media reporting on the attacks, as well as other social media channels. Additionally, researcher Niina Uusitalo has collected ethnographic information about writing news that address the topic of terror attacks at the Finnish National Broadcast Company, YLE. Kotilainen herself focuses especially on analysing the use of visual material and the images the material creates. The other researcher of the project in the National Defence University, and its local research group leader, professor Aki-Mauri Huhtinen, is using network and rhizome theories in his research, in addition to strategic communication.

Working on an International Publication and Numerous Scientific Articles

At the moment, participants of the project are preparing an international publication focusing particularly on methodology, data collection and observing the the logic and structure of a violent media event. Kotilainen says they are also working on a special issue for a scientific publication. The theme of the issue is, what kind of violence attracts attention in the media, and also, when and with what conditions does violence stay invisible. Additionally, Kotilainen is preparing a series of articles for the project, that look at brutal images and how they are used as a tool of terrorism, as well as the logic of violent media events from the perspective of gender-based violence. There will also be a seminar related to the concept of hybrid. The seminar dissects the meaning of hybrid in different contexts, such as media, influencing operations, in war and terrorism.