The Finnish Defence Forces International Centre (FINCENT) has had a new Commandant from the beginning of 2019 Lieutenant Colonel Harri Uusitalo who assumed the assignment has solid experience from international issues and crisis management. 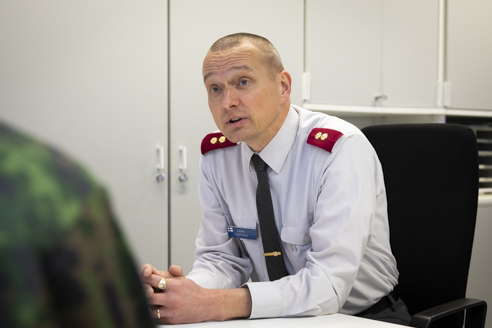 Uusitalo thinks he took on this new assignment at the right time: FINCENT had gained a foothold among international actors, and highly esteemed quality certificates the Centre had been awarded were a proof of the importance of its work. No major changes are called for even if course contents and teaching methods need be updated on a regular basis.

Military Crisis Management Centre of Excellence keeps up to date

Uusitalo considers learning to be one of the most important blocks with which the future should be built. International crisis management work should adopt a new way of thinking based on which one should start looking for solutions to conflicts before actual confrontations take place. Having an educated society - in which women and men are equal, children are allowed to grow up in a safe environment and literacy equals multi-literacy- paves the way for pre-emptively decomposing conflicts into factors that give birth to them. By doing so, there would not necessarily be any conflicts.

FINCENT is an internationally esteemed military crisis management centre of excellence striving for comprehensiveness. The training of crisis management personnel takes place in Pori Brigade. In turn, FINCENT’s role is to train professionals of crisis management- leaders and experts- on the level of information. The goal is to strive for comprehensiveness, so it is not enough to capitalize on the expertise of peacekeepers with military education only. Professionals in the fields of politics, international relations, health care and representing different organisations are needed to strengthen other types of safety factors.

According to Uusitalo, the methods used in crisis management in the 1950s do not work for all of its aspects today. Instead, new challenges need to be responded to with means that are suitable today. By way of example, he cites anticipatory use of social media and information networks. If a conflict is about to break out, messages, images and news disseminated on-line give rise to restlessness, and the amount of false or misleading information is great indeed.

– As far as the future is concerned, I think the challenge resides in how crisis management manages to take on-line phenomena into account and respond to them: will information be suppressed or is supporting learning and education the solution?

The Anniversary Year focuses on the essential

The Finnish Defence Forces International Centre celebrates its 50th Anniversary. True enough, the Centre’s activities can be regarded to have started as early as 1964 when provisional rotation training was provided for the personnel deployed on a peacekeeping operation in Cyprus. Back then, a permanent training centre was not considered necessary. The activities were continued on the basis of provisional procedures, until the UN Training Centre Headquarters was established on 23 October 1969. In 1982, its name was changed to the UN Training Centre. At the beginning of the millenium, in 2001, the command of the Centre was transferred from the Ministry of Defence to the Defence Command. At the same time, it was renamed the Finnish Defence Forces International Centre. The latest major change took place in 2015 when FINCENT was attached to the National Defence University and moved to new premises in the Santahamina Building.

This Anniversary Year, of course, it is important to take a look at the past, but Uusitalo wishes focus on the future. In October, a seminar looking at issues involving international crisis management will be organised as a part of the Centre’s 50th Anniversary celebration. The objective is to establish an international forum for learning and open dialogue. In other words, it is not about celebrating for the sake of celebrating. On the contrary, for Uusitalo it is also an opportunity to bring together professionals of crisis management.

– This Anniversary Year affords us an opportunity to find trends to show to which direction the entity comprising crisis management, peacekeeping and international activities should be taken in order for us to be able to respond to challenges emerging in the world, Uusitalo deliberates.

During this Anniversary Year, Uusitalo wishes to emphasize the importance of doing things together. Instruction and planning will be implemented in cooperation between several national and international organisations.

– Do don’t do this alone but together with others. Getting networked and doing things together are means for finding solutions. Provided we have a sufficiently well-functioning network, supervisors who understand and support the activities and employees who act as competent professionals, things will go just fine, Uusitalo points out.

Before assuming his new duties, Uusitalo worked as the Crisis Management Chief of the International Sector of the Defence Command Plans and Policy Division, and before that as the Commander of the Finnish Crisis Management Contingent in Lebanon. Before that, Uusitalo was the Director of the Topographic Service which is also strongly connected to international activities.

He has devoted the first months in his new post to familiarizing himself with the Centre and its personnel and procedures. Now that he has become more familiar with the administration of the Centre, it is easy for him to start working with international cooperation partners.

– This is a fine assignment in which you get an opportunity to work with different kinds of people. You have to find the time to talk to people and discuss challenges with them, in other words, you have to have an opportunity to interact. In this job, you can gradually start to build a more sustainable future, Uusitalo points out.